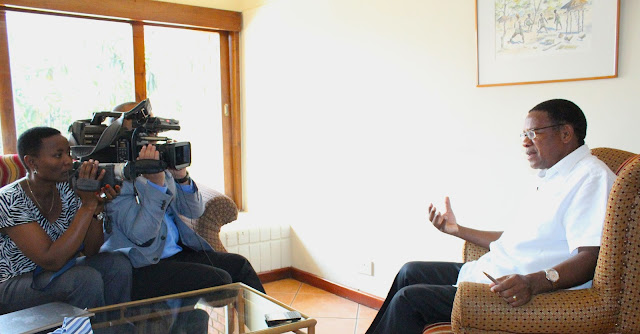 Hon. Bernard K. Membe (MP), Minister for Foreign Affairs and International Co-operation explains something during an interview with Tanzania media earlier today in Lilongwe, Malawi.  Minister Membe is in Malawi attending the Southern African Development Community (SADC) Council of Ministers Meeting since 14 of August to the 16 of August, 2013. 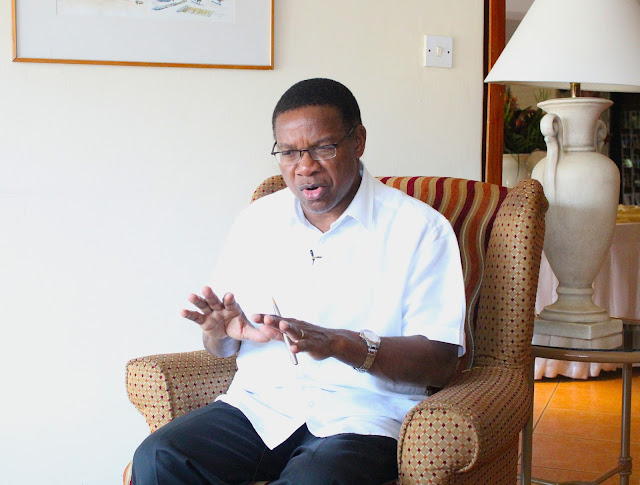 Hon. Minister Membe explains about the Lake Nyasa row between Tanzania and Malawi.

Minister for Foreign Affairs in Malawi, Hon. Ephraim Chiume yesterday showcased the Lake Nyasa (also known as Lake Malawi in Malawi) to the Southern Africa Development Community Council of Ministers who have been meeting in Lilongwe, Malawi for the past two days.

Minister Bernard K. Membe (MP) of the Ministry of Foreign Affairs and International Co-operation in Tanzania also had an opportunity to meet for a

“We had a good discussion on our current boundary dispute and we were trying to find a common ground to advise our respective Presidents later this afternoon,” said Hon. Membe.

President Jakaya Mrisho Kikwete is expected to arrive later this afternoon in time to participate in the 33rd Heads of State and Government SADC Summit at Bingu International Conference Centre in Lilongwe, Malawi.

Tanzania and Malawi have been involved in an historical follicle for a decade, as the two countries are still entangled in dispute, trying to find amicable solution to resolve the matter. Tanzania claims fifty percent of the Lake, while Malawi claims full ownership of the Lake.

Currently the matter is before the Mediator Mr. Joachim Chissano, former President of Mozambique, who leads the Forum of the former African Heads of State from the SADC region, along with former President Thabo Mbeki of South Africa and former President Festus Mogae of Botswana and the seven eminent legal experts of international repute.

Speaking before reporters, Hon. Bernard K. Membe (MP), Minister for Foreign Affairs and International Co-operation said the two countries are waiting recommendation from of the Forum.

“We are ready for any recommendation provided by the Forum, whether the matter is settled or recommended to seek other higher forums such as International Court of Justice,” said Minister Membe.

It should be noted that Tanzania has not ratified the treaty establishing the ICJ, which renders rather difficult for Malawi to bring her before the Court without any prior consent.

Posted by ForeignTanzania at 4:18 PM